Lucky for us that there is enough complementarity between what human stem cells need and what the mouse can provide so you can get human repopulation of the mouse's blood system.

In the blood system, there are a lot of steps that a cell has to go through to read out as a stem cell. You take a source of stem cells, you put it in a syringe and you squirt them into the blood stream. Essentially you are taking advantage of a beautiful property of these cells, which is [their ability] to find their way to the bone marrow. You can imagine that you could have a cell that's a perfectly good stem cell, but if a cell has lost one homing marker, it wouldn't go through these heroics and it would never read out in the transplant assay.

It's a problem that plagued us [until we realized that] if we are already extracting bone marrow by tapping the femur of the mouse, we could do an interfemoral injection; that turned out to be really powerful in that it bypasses the heroics, and it's a more sensitive way to test stem cell function. What you really want to ask is: Will every stem cell in my test mixture read out in this assay and will every cell that's not a stem cell not read out? Look at [Sean] Morrison: just by changing the environment, he went from 1 in 1, to 1 in 4 [sampled cells reading as cancer stem cells].


He read out more of their stem cell potential. We ended up calling the cell a repopulating cell rather than an HSC [haematopoietic stem cell] just because we didn't have a full enough picture of what the cell did to really call it an HSC, and it seemed more cautious and perhaps more informative to define the cell based on what it did — which was repopulating a SCID mouse.

Stem Cells: Cell-Based Assays and the World of Small Molecules

And then we could apply whatever criteria, like this is a repopulating cell that will last at least 10 weeks and will generate these types of mature cells, and so you build layers on top of the definition. We hoped that that would eliminate some of the controversy about language.

So people could start to agree about where they were similar and where they were different. A problem in the field is that people don't ascribe to the same criteria. Two people stand up and talk about a stem cell, but one of them is a short readout and the other one is a long readout, and they can't agree on what the properties of those cells are. Essentially it's a language problem. We want to use shorthand. We use these words, 'stem cell' and 'progenitor cell', but the nature of the cell is essentially defined based on the assay by which it's been identified.

One can't dissociate the study of leukaemia stem cells from normal blood development. It's one of the first tissues that was well studied. We had these assays [for normal cells], and we thought we might as well apply them to leukaemia. To identify leukaemia stem cells, Dick used a xenotransplantation assay to show that a subset of these cells can regenerate the disease. Tell me about the reaction to your paper. Benign neglect. It didn't have a lot of impact. People in the blood field were satisfied with that result. At least for the people who thought about it, it was a natural progression of what people had thought about from the previous work.

There were these proliferative cells that first of all were assayed based on the colony assay, developed in the s. We knew from the normal blood system that the colony assay did not read out a stem cell. And this was essentially saying there's another cell, that there was a hierarchy. 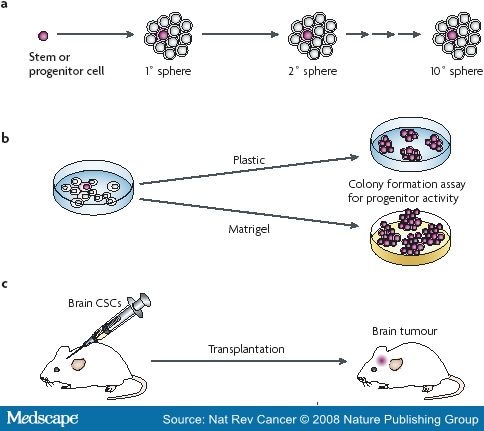 What it does is it actually eliminates sloppy thinking. That's a little tongue in cheek. But it does. Controversy sparks better and better science. There's been a real rush onto the cancer stem cell bandwagon in the last couple of years. People are talking about cancer stem cells here, there and everywhere, and in any old cell line. There was a huge slippage in the kind of criteria and rigor. People were using this terminology without any thought or any rigor based on some cell-surface marker or something like that.

There was a lot of hype of CSCs [cancer stem cells] being the answer to everything. How universal is it? People don't like to do the tough assays, the three-month assays that you transplant in an animal for tumour formation. It's much easier to go on a flow cytometer and find a marker and say it's a cancer stem cell marker and say "now I'm studying cancer stem cells. But we know that differentiation gets mucked up [in cancer].

In normal subsets, you can have four or five markers and you know what that cell is.

In cancer you have to be careful. In cancer more than anything, you won't be able to get away from doing these cumbersome assays. You also can't sit down in your basement cowering in the dark, saying you can't do anything because there's a problem with everything. You have to go forward. It's how progress gets made, just being very circumspect about what an experiment is telling you and what it isn't.

What's going to be the next tool that will be as useful as a FACS machine or a xenotransplant assay? The short answer is doing biology on single cells. In the context of tissues and tumours, cells are heterogeneous, and we have to deal with that heterogeneity. The days of growing up a batch of cells and cracking them open and doing a bunch of biochemistry to work out pathways — that's brought us where we are today, but if we're interested in pathways or how molecules can interfere with pathways, we need to know how a single cell is responding. For years, the goal has been to achieve the highest tumour-kill frequency.

The problem is some cells are more potent than other cells, and on top of that these cells have mechanisms that make them more resistant. The whole idea of a cancer stem cell was raised to explain heterogeneity. If a tumour isn't heterogeneous in some function, the CSC model isn't wrong so much as irrelevant. If you're saying that all cells can acquire these stem cell properties, that's really supporting the stochastic models — that's saying that depending on the external or internal environment, any cell could be a cancer stem cell. If there's randomness to it, you're left with the idea that every cell has equal potential, and that's a fundamentally different concept from the hierarchical model where it's more intrinsic to the stem cells.

A hierarchy implies that you have some maturation process. You have a stem cell, you have transit-amplifying cells and [then] some kind of blood cell. If you have a hierarchy in the cancer, it implies that these stem cells are actually differentiating, they are doing it abnormally, and you can imagine over tumour evolution that the differentiability of the tumour cells becomes more and more impaired.

It's possible that, with tumour evolution, the distances between the CSC to transit-amplifying to mature cancer cells might be relatively low compared to the bulk tumours, and the shape of the hierarchy becomes rather shallow. Expression was normalized to 18 S rRNA. Nine candidate genes 8 up- and 1 down-regulated were validated using qRT-PCR and showed significant differences between Pre-M and Post-M endometrial epithelium, concordant with the microarray data Fig.

see url Similarly, magnetic bead sorting separated a median In contrast, P-cadherin was expressed by a median 0. S1A, B.

CE, cloning efficiency. Immunofluorescence revealed that N-cadherin was located on the apical surface and lateral junctions of the plasma membrane of epithelial cells in the basalis and occasionally in functionalis glands of Pre-M Fig.